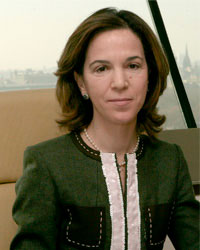 Bankinter appoints Gloria Calvo Secretary-General of the bank and Secretary of the Board of Directors.

Until now she was working as Chief Public Prosecutor at the Ministry of Economy and Competitiveness.

The Bankinter Board of Directors, at the suggestion of the Appointments and Corporate Governance Committee, has appointed Gloria Calvo Díaz the new Secretary-General of the bank and Secretary of the Board.

Besides her own functions as Secretary-General, Gloria Calvo will also be part of the Management Committee of the institution, and will be responsible for the Legal and Fiscal department of the bank, Compliance with Standards and Money Laundering.

As the new Secretary-General of Bankinter and Secretary of its Board of Directors, Gloria Calvo occupies the position that was left vacant after Mónica López-Monis departed the bank in February.

Born in León in 1963, Gloria Calvo is a Public Prosecutor and has had different responsibilities related to the State Administration almost all her career. Over the last three years as Chief Public Prosecutor at the Ministry of Economy and Competitiveness, she has covered legal assistance in matters of responsibility of the three State Secretaries into which the Ministry is organised, as well as the Undersecretary's Office and, via this, the Minister and his Cabinet. Similarly, she took part on the meetings of the Governing Committee of the Fund for Orderly Bank Restructuring (FROB).

Previously, she had undertaken roles such as Public Prosecutor before the Chamber for action under administrative law of the Spanish High Court in issues regarding taxation.

From its creation in 1996 and until 2011 she was part of the Comisión del Mercado de las Telecomunicaciones (Telecommunication Market Board, CMT), an organisation created for the liberalisation of the audiovisual and interactive telecommunications network and service markets.

Similarly, she was the representative of the Legal Service of the State before the Court of Justice of the European Communities

With this appointment, Bankinter incorporates into the structure of the company a professional with broad knowledge in legal, fiscal and financial matters, as well as in issues related to the corporate governance of companies and the transposition of the standards of EU Law, which will constitute a valuable contribution to the bank in an environment, such is the current one, of new challenges and adjustment to the new demands derived from the single European supervisor.