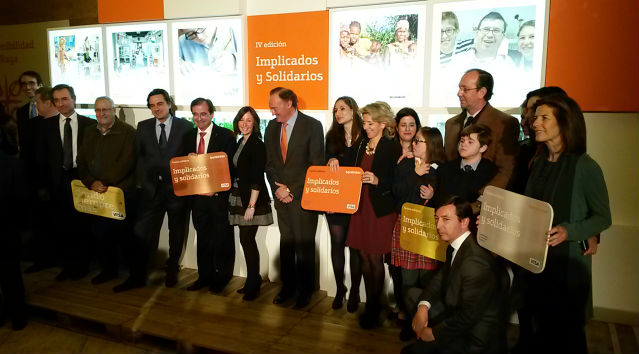 Bankinter celebrates the IV edition of

The winners will use the donations given to support social projects.

109 NGOs and foundations from various different places in Spain presented their projects.

Yesterday, Bankinter celebrated the IV Edition of “Involvement and Solidarity”. NGOs and foundations from all over Spain attended the event to find out which five projects had been chosen, out of the 109 that were presented.

First assignment went to the foundation Talita for its "Mobile classrooms" project, an idea aimed at integrating children with special educational needs into classes. Silver was awarded to the NGO SAUCE, for their work in mitigating the consequences of the war for children in Cambodia. Fundación Nipace, a national leader in therapies for children with cerebral palsy, took the bronze. Last but not least, Fundación Desarrollo y Asistencia and Fundación Oxiria received the two runners-up prizes; not forgetting the other five projects that were each given grants of €2,000.

The event was held at the Bankinter headquarters, on Paseo de la Castellana in Madrid. Pedro Guerrero, the chairman of Bankinter, took the opportunity to thank those preseent for their work: “What you do, the example you set, has repercussions for all of us, helping us become better and demonstrating that another world is possible”.

The chairman also emphasised the importance of “Involvement and Solidarity”, defining it as a meeting point for NGOs, foundations, social volunteers and all the companies and people that spend their time making the lives of others easier and happier.

"Involvement and Solidarity" is an initiative involving several groups linked to Bankinter: customers who use the Bankinter Solidaria Visa; bank employees who present different social projects to society, and who get involved and promote these projects on social networks; and managers in the institution, who sponsor the various projects.

The initiative is part of Bankinter's 2012-2015 Sustainability Plan, called "Tres en Raya", or noughts and crosses, that is aimed at aligning the business with the three dimensions of CSR: its economic, social, and environmental facets.