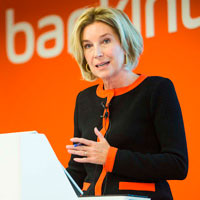 Bankinter doubles its net income for the first nine months of the year, to €155.8 million

The quality of the Bank's assets continues to improve relative to the sector as a whole, with a non-performing loan ratio of less than half the sector average.

Earnings before provisions maintain their upward trend, growing by 9.4% and allowing the additional provisions for refinancing to be absorbed.

The Bank continues to strengthen its solvency, attaining an EBA capital ratio of 11.7% at the end of the third quarter.

These solid results are based on good performances from all revenue sources, particularly those deriving from businesses on which the Bank has focused its strategy, such as private and corporate banking, and on the strong results of the insurance activity. This improvement in revenue, together with cost containment, led to a further improvement in the cost/income ratio for the banking activity, which was 41.2% for the period.

In parallel with this, Bankinter continues to improve its level of solvency, as well as its financing structure and the quality of its assets, further increasing its lead over the rest of the sector.

In this regard it should be pointed out that the Bank's NPL ratio at the end of the third quarter was 4.99%, considerably less than half the sector average, and that the increase relative to the previous quarter was due largely to the reclassification exercise carried out on refinanced loans in accordance with the new Spanish central bank criteria. In fact, of the approximately €200 million increase in doubtful debts compared with the previous quarter, €144 million is due to this change of criterion.

Bankinter's portfolio of refinanced loans at the end of Q3 stood at €1,719 million, representing 3.8% of the total computable risk, as against comparable banks 11% average. Of this refinanced portfolio, 39% is in `regular status´, 22% in `sub-standard´and 39% is in arrears.

Bankinter's portfolio of repossessed assets is also very small and of high quality, concentrated particularly in residential property and in all cases with adequate risk cover. The gross value of the portfolio is €643.5 million, with cover of 37.5%. Furthermore, the Bank is selling them at an exceptionally fast pace, with gross sales of these assets representing 85% of gross new additions during the first nine months of the year.

As regards solvency, Bankinter continues to strengthen its capital ratios, reaching an EBA capital ratio of 11.7% at the end of the third quarter, thanks mainly to the generation of recurring profits and a reduction in capital requirements in cover of lending to SMEs.

We should also stress that the Bank has no wholesale debt issues maturing until the fourth quarter of 2014 (€1.2 billion), with a further €1.2 billion due in 2015. The Bank has €6.3 billion of liquid assets with which to meet these maturities.

In line with this, the Bank has continued to improve its financing structure, reducing its liquidity gap by €2.6 billion so far this year, while at the same time strengthening the ratio of deposits to loans, which stood at 71.8% as at 30 September 2013, compared with 64.9% one year earlier.

As regards the various margins in the income statement, the interest margin for the first nine months of the year stood at €461.9 million, representing a 10% decrease relative to YTD 30 September 2012, due essentially to the sharp fall in one-year EURIBOR, which is still at all-time record lows. However, this reduction in the interest margin continues to recover, having bottomed out in the first quarter. In fact, the interest margin for the third quarter was €173.5 million, which is 11.3% more than the figure for the second quarter, which in turn was already 17.5% up on the first quarter of the year. This improvement was due to positive trends in customer margins and reduced financing costs.

As regards the gross margin and the margin before provisions, Bankinter continues to increase growth figures quarter by quarter. This is particularly noteworthy in the current difficult environment.

The gross margin for the nine months to 30 September was €993.4 million, 4.2% up on the same period of last year (YTD end-June it was 2.4% up), thanks to the good performance of net commissions, which increased by 18.5% for the period, due largely to the private and corporate banking activities.

As for the margin before provisions (€492.6 million YTD 30 September 2013), it was up by 9.4% on the previous year (YTD end-June 6.1%), which allowed the €19.6 million of additional provisions required by the supervisor relating to the review of refinancing operations to be absorbed.

Turning to the balance sheet, Bankinter's total assets at the end of the third quarter stood at €57,752.5 million, 0.9% more than at 30 September 2012. Resources under the Bank's control amounted to €48,110.9 million, representing an increase of 11.7%. Also worth highlighting is the increase in resources managed off-balance sheet, particularly investment funds, which grew by 53.6% compared with the third quarter of 2012, and the consequent 30.4% increase in management fees received.

Customer lending amounted to €41,207 million, 3.9% less than at 30 September 2012, although it should be borne in mind that in that same period total lending of the Spanish finance sector fell by more than twice as much as this.

As regards customer business, the Bank continues to focus its strategy on specific customer segments, especially private banking. Between September 2012 and September 2013, the number of new private banking customers won over was 21% more than in the preceding twelve-month period. In that same period private banking customers' assets with the Bank increased by 18.2%. Another positive figure is the number of SICAV open-ended collective investment funds managed by the Bank, which stood at 277 at the end of the third quarter, 9.9% more than a year before.

The insurance sales and distribution business showed a similar trend, particularly as regards Línea Directa, with significant growth in all branches. The total number of policies of Línea Directa as at 30 September 2013 stood at 2.06 million, representing an increase of 5.9% compared with the end of Q3 2012. By branch, in relative terms the 30.4% YoY increase in the number of home insurance policies stands out.

The quality of customer service through all the Bank's various channels and networks continues to be one of the key factors on which the Bank bases its growth strategy. According to EQUOS RCB's `Analysis of objective quality in commercial banking networks´, Bankinter comes out on top at the end of the third quarter of this year, with 7.26 points compared with the market average of 6.04.

Lastly, we should point out the good performance of Bankinter's stock (BKT) during this period. Over the past twelve months the stock has gained 83.30% adjusted for the bonus issue.